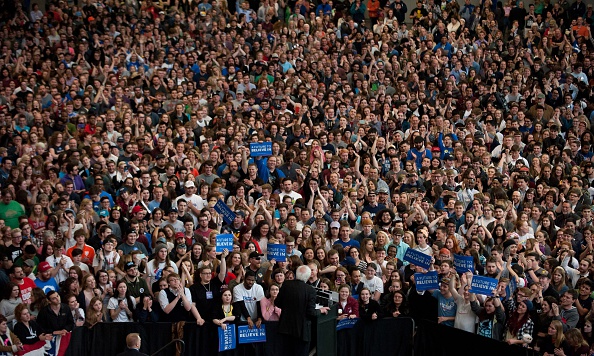 Democratic presidential candidate U.S. Sen. Bernie Sanders (D-VT) speaks to supporters at the David L. Lawrence Convention Center on March 31 in Pittsburgh, Pennsylvania. After wins over the weekend in Alaska, Hawaii and Washington, Sanders is campaigning ahead of the April 26 primary in Pennsylvania. Jeff Swensen/Getty Images

Anger erupts over legislation being called anti-LGBT in North Carolina, Mississippi and elsewhere. The Supreme Court deadlocks on a union dues case, delivering a major victory to organized labor. And the Court hints it’s seeking to avoid a 4-4 split in the case of the Affordable Care Act’s birth control mandate. A tough week for Donald Trump, who caused outrage with comments on abortion, and trails Ted Cruz in the polls ahead of the Wisconsin primary on Tuesday. And the FBI unlocks the iPhone used by one of the San Bernardino shooters, ending a legal battle with Apple. A panel of journalists joins Diane for analysis of the week’s top national news stories.