The Freedom And Safety Of Reporters Around The World

The Freedom And Safety Of Reporters Around The World 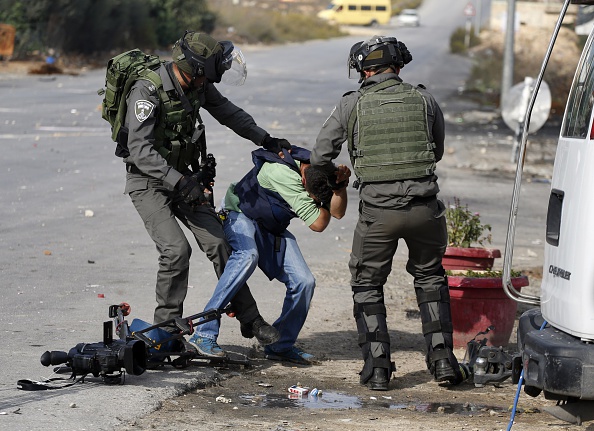 Israeli border guards aggress a journalist during clashes between Palestinian demonstrators and Israeli security forces at the entrance of the Palestinian town of Al-Bireh on the outskirts of Ramallah in the Israeli-occupied West Bank, on October 30, 2015. Abbas Momani/AFP/Getty Images

Last Saturday night Jason Rezaian, the former Iran bureau chief for the Washington Post, appeared at a correspondents’ dinner and joked that the audience there sure beat solitary confinement. It was a light-hearted moment underscoring a serious, growing issue. In July of 2014 Rezaian was arrested in Tehran and imprisoned until January of this year. His plight became a symbol of the many risks journalists face around the world.
According to the Committee to Protect Journalists, 72 reporters were killed for doing their jobs. Nearly 200 are unjustly jailed. Today, we look at the dangers of journalism and the reality of censorship.

Clarification from Dana Priest on May 4, 2016: “The local media did cover the water problems from the start. Some critics have made the case that they could have been more aggressive, but I think that’s a different point than the too-stark one I made yesterday. It was really the national media (and statewide Michigan media) who were late to the story, which is what I probably conflated in my mind, having read some of that criticism.” More information.

How You Can Help

During our show on World Press Freedom Day, a panel of prominent experts discussed the dangers journalists face around the world. If you've been inspired by their conversation, two of our guests - Delphine Halgand of Reporters Without Borders and Dana Priest of the Washington Post - provide their top resources and suggestions below.