Debate Over U.S. Re-engagement With Cuba As President Obama Makes A Historic Visit

Debate Over U.S. Re-engagement With Cuba As President Obama Makes A Historic Visit 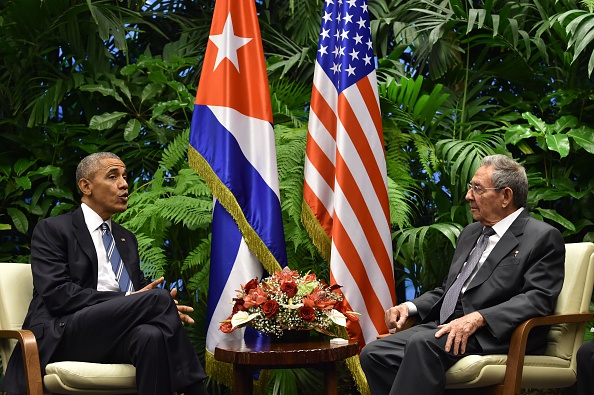 U.S. President Barack Obama and his Cuban counterpart Raul Castro meet March 21 in Havana's Palace of the Revolution for groundbreaking talks on ending the standoff between the two neighbors. Obama, meeting Castro for only the third time for formal talks, was the first U.S. president in Cuba since 1928. Nicholas Kamm/AFP/Getty Images

President Obama and President Raul Castro declared a “new day” of openness between the United States and Cuba yesterday in Havana. But old disputes over human rights are clearly visible during Obama’s historic trip to the island. It’s the first time a sitting U.S. president has visited Cuba in 88 years. The visit comes after Obama announced in 2014 that the U.S. would establish diplomatic relations with Cuba. But many think re-engaging with the dictatorship is a mistake. And most lawmakers do not want to lift the economic embargo of Cuba. Guest host Katherine Lanpher and a panel of guests talk about the debate over what a new era of relations with Cuba could mean for commerce, human rights and politics.