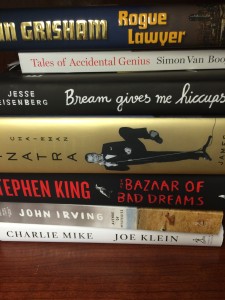 Here’s what’s on tap for November:

You know him from his Oscar nominated role as Mark Zuckerberg in “The Social Network.” But the actor and playwright is also a fiction writer, and he’s often likened to a young Woody Allen. Eisenberg’s new book of short stories combines humor, satire and deep compassion for the need for human connection.

This is a new collection of short stories from the master of horror and international best seller. It includes poetry and personal introductions that provide readers glimpses into King’s writing process. The New York Times writes: “What’s unusual about the tales in this volume is how many of its deaths are ordinary, mundane sorts of demises: deaths by cancer or heart failure or car accident or simple, non-­supernatural homicide.”

The author of “The World According To Garp” and “A Prayer For Owen Meany” is back with his 14th novel. Reviewing “Avenue Of Mysteries” for The Washington Post, Ron Charles says Irving has “created some of the most wildly inventive characters in American literature.” Listen to Irving’s past appearances with Diane here and here.

Siddhartha Mukherjee: “The Laws Of Medicine”

Siddhartha Mukherjee’s last book “The Emperor of All Maladies: A Biography of Cancer” won a 2011 Pulitzer prize. Now the cancer physician and researcher describes the most perplexing and illuminating cases of his medical career and establishes the laws that govern his practice of medicine. He addresses some of the ideas in this TED Talk.

The idea for Isabel Allende’s new novel came from a walk with a friend in New York City. It’s the story of a Jewish girl who escapes from Poland to San Francisco in 1939 and becomes friends with the son of her family’s Japanese gardener. The book has just been published in English. Allende told the Wall Street Journal she can write a speech or magazine article in English but not fiction. Listen to earlier interviews with Diane here, here and here.

John Grisham has written 30 novels and sold more than 300 million copies of his books. His latest legal thriller stars Sebastian Rudd, a criminal defense attorney who takes the cases no one else wants. Like most of Grisham’s novels, this one is topping best seller lists. Check out earlier Diane Rehm Show appearances here, here and here.

A Veteran’s Day special, “Charlie Mike” tells the story of young veterans who come home from war and find ways to apply their military service to civilian life. Klein, who is a long time political reporter, said he took on this project because he saw so much unrealized potential in these veterans.

An eccentric film director, a teenage boy working in a pet shop, a lonely Beijing stree vendor who becomes a millionaire overnight — Simon Van Booy’s new short story collection explores how our need for human connection transcends loneliness and fear. Don’t forget to read his moving 2009 New York Times “Modern Love” column on raising his daughter after the death of his wife.

The veteran newsman warns in his new book that cyber attacks could take down the nation’s power grid — and we are hopelessly unprepared for it. He told the San Diego Union Tribune: “I’m convinced by the experts I’ve talked to that the Russians and the Chinese already have what amount to cybertime bombs in our power grid.”

The second of two volumes on “Ol’ Blue Eyes,” James Kaplan picks up in 1954 after Sinatra wins his Academy Award. He says that Sinatra’s life post-Oscar was astounding in scope and achievement, and occasionally scandalous.

Check out all our upcoming shows.