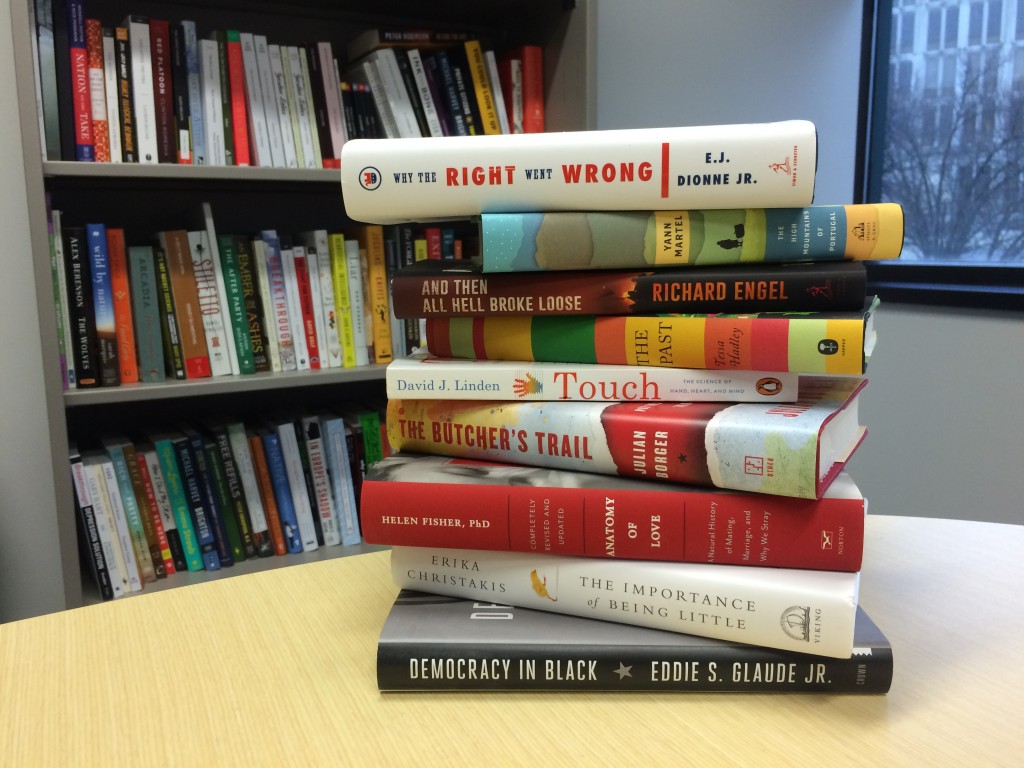 Selected books from our January and February shows. The Diane Rehm Show

But first, in case you missed it, here’s what we covered in January:

Get your financial planning off to a good start this new year. Teresa Ghilarducci, a labor economist and New School professor, says more than 50% of middle-class Americans are likely to be downwardly mobile in retirement. She offers practical advice and policy solutions.

In the early seventies, singer-songwriter Carly Simon’s string of hits, her endless smile, and romance with fellow musician James Taylor seemed to make up a folk-rock fairy tale of a life. But in her new memoir, Simon says that was hardly the case.

When Barack Obama was elected president in 2008, some believed it would usher in a post-racial era. But Princeton professor Eddie Glaude was leery of these predictions from the beginning. His new book calls for major changes when voters go to the polls in 2016.

To help younger generations better understand the civil rights movement, Congressman John Lewis — who was a student leader at the time — and a young co-author have embarked on a trilogy of graphic novels.

Nobel Prize-winning economist Joseph Stiglitz has spent a career thinking about how to address income inequality. His recent book examines the causes and consequences of an unequal society and offers solutions for what we can do about it.

Two former Senators and majority leaders from different parties offer their thoughts on dysfunction in Washington — and present ideas on what do about the current polarization.

Washington Post columnist E.J. Dionne takes a look back at the Republican Party. He says the conservative GOP of today is not the product of the Tea Party — but dates back to 1964 and the Barry Goldwater campaign.

Tessa Hadley: “The Past”

The Guardian calls Tessa Hadley one of Britain’s great contemporary novelists, comparing her to Jane Austen and Henry James. In her new book, a family of siblings meet at their grandparents’ old house for three weeks over the summer — and tension erupts.

A young couple in Afghanistan defied their parents’ opposition to marrying and eloped. His family came to accept the marriage, but hers wants her dead to restore their honor. This story gained international attention when a New York Times reporter wrote about the couple in a series of articles — and now in a book.

An estimated 80 percent of Americans have siblings, and whether those relationships are good, bad or somewhere in between, researchers and therapists say they are some of the most important and longest of our lives. Two professors of social work advise on how to maintain those relationships in adulthood.

A tip from David Kaczynski led to his brother Ted’s arrest for a series of bombs he’d sent through the mail. Since then, David has become an anti-death penalty activist and a mental health advocate. Now he has written a memoir.

Here’s what’s on tap for February:

David Linden: “Touch: The Science of Hand, Heart, and Mind”

The leading neuroscientist, a professor at John Hopkins University, explains how our sense of touch affects our social interactions and our experience of the world.

After the 1990s conflicts in the former Yugoslavia, the international community identified 161 suspected war criminals. Fourteen years later, every single person on the wanted list had been captured. The Guardian’s diplomatic editor recounts one of the most successful manhunts in history.

A young man haunted by family tragedy takes a road trip through the mountains of Portugal to search for an unusual artifact in this new novel by the best-selling author of “Life of Pi.”

Erika Christakis: “The Importance of Being Little”

Young children are inherently powerful, the early childhood educator and former Yale lecturer writes in her new book. She shares strategies for better support in early childhood that promote learning over schooling.

In the early 1990s, biological anthropologist Helen Fisher wrote “The Anatomy of Love.” Now she’s back with an updated version that incorporates new research and explores how love has changed in the last quarter century.

From highways to bridges to neighborhood streets, a civil engineer and historian explores how America’s physical infrastructure came to its current crumbling state, and why he says its urgent rebuilding plays a crucial part in securing our future prosperity as a nation.

Richard Engel: “And Then All Hell Broke Loose”

NBC’s chief foreign correspondent tells the story of two decades covering the Middle East. He started working from Cairo at 23, fresh out of Stanford, and then reported from Jerusalem, survived the Lebanese war, and went to Afghanistan with the Taliban and Iraq with ISIS, among other adventures.

The senator from New Jersey draws on his experience as a public servant to call for a re-orientation of the country’s politics around “compassion and solidarity.” He shares the lessons he learned along the way and discusses issues he deeply cares about, such as mass incarceration and environmental justice.

This new novel from the former U.S. Army captain who wrote the critically acclaimed Iraq War memoir “Kaboom” is about a young American soldier who is drawn deep into the lives of local Iraqis as he investigates alleged killings of civilians.