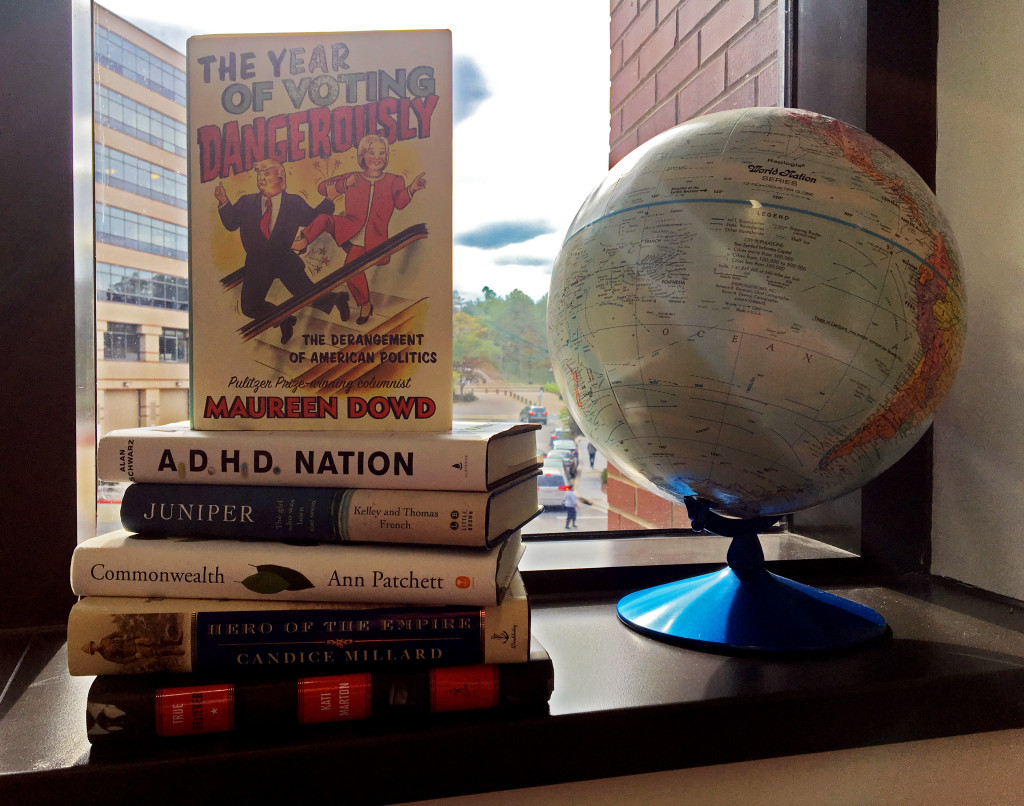 Some of the books we'll be reading in September. The Diane Rehm Show

Ready for a new read? Each month we give you a preview of the books and authors we’re bringing on the show.

Here’s what we’re reading in September:

Jesmyn Ward: “The Fire This Time: A New Generation Speaks About Race”
Jesmyn Ward, a National Book Award-winner for “Salvage the Bones,” turned to James Baldwin’s “The Fire Next Time” for comfort, wisdom and inspiration after the deaths of Trayvon Martin, Eric Garner and Michael Brown. Ward felt the questions he addressed half a century ago were still relevant, and she wanted to hear how contemporary writers would respond.

Kati Marton: “True Believer: Stalin’s Last American Spy”
The writer behind “Paris: A Love Story”  tells the story of Noel Field, a young U.S. State Department employee who fell in love with an idea called communism and decided to betray his country for it, even as the system betrayed and nearly destroyed him.

Cary Fowler: “Seeds on Ice: Svalbard and the Global Seed Vault”
North of the Arctic Circle, deep inside a mountain in Norway, there’s a tunnel carved into the rock. It leads to a big room with subzero temperatures, filled with hundreds of seeds from all over the planet. In a new book, the “father” of The Global Seed Vault talks about its role in protecting the world’s food supply from political upheaval and climate change.

Jonathan Safran Foer: “Here I Am”
The author of”Everything is Illuminated” and “Extremely Loud and Incredibly Close” releases his first book in 11 years: the story of a troubled marriage unraveling in Washington, D.C., as a catastrophic earthquake in Israel leads to war in the Middle East.

Ann Patchett: “Commonwealth”
Like so much of Patchett’s work, her newest novel reflects her interest in what happens when people are uprooted and thrown together under new and unfamiliar circumstances. But this work, she says, is her most personal yet—dealing with divorce, its aftermath and the complicated reality of blended families.

Akhil Reed Amar: “The Constitution Today: Timeless Lessons for the Issues of Our Era”
This Yale law professor says there’s a tension between constitutionalism and journalism, the big battle between the “isms.” Constitutional scholars think about principles adopted at the country’s founding. Journalists focus on fast breaking news. Now, Amar’s trying to bridge that gap, an idea he lays out in his new book.

Mark Thompson: “Enough Said: What’s Gone Wrong with the Language of Politics?”
Public anger against conventional politicians and their parties is on the rise across the Western world—but New York Times CEO Mark Thompson warns that underneath this growing support for populist candidates is a breakdown of our public language, which he says is being misused and misunderstood.

Alan Schwarz: “ADHD Nation”
About 15 percent of children in the U.S. receive a diagnosis of Attention Deficit Hyperactivity Disorder—about three times the rate most experts agree is appropriate. Over-diagnosis of ADHD, investigative reporter Alan Schwarz says, means millions of kids may be taking powerful medications for a psychiatric disorder they do not have, or are not getting the support needed for the real challenges they do face.

Berkeley Breathed: “The Bill the Cat Story: A Bloom County Epic”
More than 25 years after the end of the comic strip “Bloom County,” for which creator Berkeley Breathed won a Pulitzer Prize, its beloved feline star is back in a children’s book that outlines his origin story for a new generation of fans.

Candice Millard: “The Hero Of The Empire”
The best-selling author of Destiny of the Republic and The River of Doubt delves into a new topic: Winston Churchill’s little-known, but “thrilling,” adventures in the turn-of-the-century Boer War, which Churchill himself would later say, “could I have seen my future, was to lay the foundations of my later life.”

Maureen Dowd: “The Year of Voting Dangerously: The Derangement of American Politics”In a new book, the New York Times columnist, who has covered both of this year’s presidential candidates since the 1990s, lays out the twists and turns, the “psychologies and pathologies” of what’s made the 2016 campaign so unusual—and nasty, she says.

Kelley and Thomas French: “Juniper: The Girl Who Was Born Too Soon”
Juniper French was born four months early, weighing just over one pound at birth. In a new book, her parents, journalists Kelley and Thomas French, tell the story of her fight for survival and the challenges and rewards of raising a “micro-preemie.”

Lauren Groff: “Fates And Furies” (Readers’ Review)
The 2015 bestselling novel is the story of a marriage, told from the husband’s point of view, then the wife’s. Through their clashing accounts of life together, the novel unearths the myths and realities behind their union.